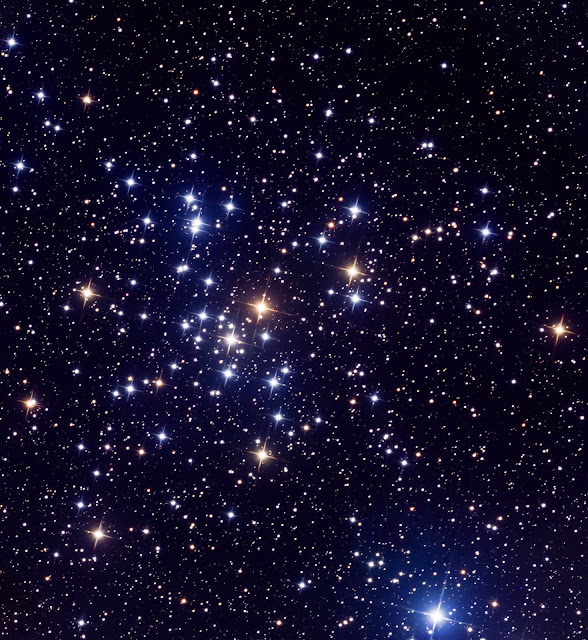 You can never have too much bling in your astronomical life. Peter Treyde has obliged with this oh-so-shiny shot of the open star cluster Messier 41.

This lovely cluster is located near the very bright star Sirius—the brightest star in our skies actually (not counting our own one!). Sirius is also known as the Dog Star, because it is located in the constellation Canis Major—the Great Dog. M41 is four degrees south of Sirius. A degree is about the width of your pinky held out at arm's length.


I still have much to learn about the astro-imaging game. But I decided to grab an image of M41 last week. If you do not look too closely, this image looks OK. But the reality is at about 1.00am when I stumbled out of bed and down to the observatory to start gathering this data, I was not fully awake, so I did not take much care in setting up the auto-guider. The consequence of this is that the stars have poor aspect ratios…i.e. they ain't round.Pixinsight has a nice deconvolution algorithm that can actually repair bad tracking—it’s called “motion blur PSF”. I think this image will provide a good test for it.
Details: 30 min subs at -30C, 90 min each RGB binned 1x1.Processing in Pixinsight. Batch pre-process, cosmetic correction, dynamic crop, dynamic background extraction, channel combination, background neutralisation, colour calibration, deconvolution. Apply screen transfer function to the Histogram Transformation and export as a jpeg. Some further minor adjustment in Lightroom 5.

Those pretty lines coming out of each star are called diffraction spikes. Reflecting telescopes (ones with mirrors instead of lenses) of the Newtonian design have their secondary mirror suspended in the middle of the telescope by four thin struts. These struts cause the light to refract slightly around them, leading to these spikes.

Some other telescope designs such as the Schmidt–Cassegrain have their secondary mirror suspended in the middle of a glass lens (called a corrector plate), so don't have any struts and therefore don't cause any spikes in viewing or photos. But many people really like the effect of the spikes, so some astrophotographers actually use tools like Photoshop to artificially add them in where they don't exist!