A bird in flight. An incredibly detailed photo of M42 by Jonathan Powles 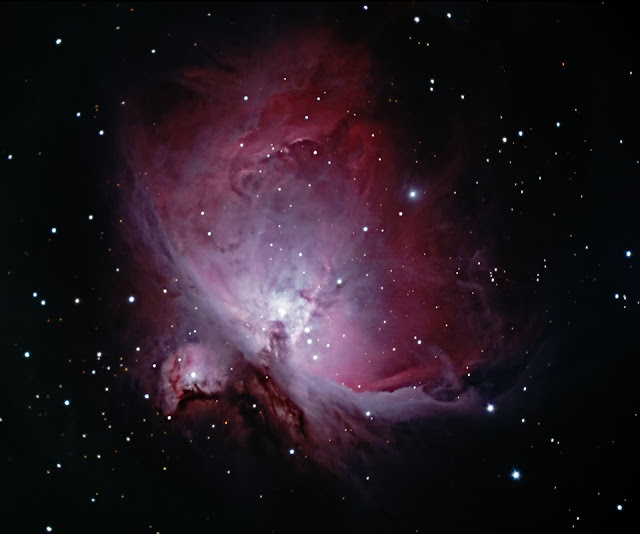 Just visible to the naked eye in the constellation of Orion as the central of the three 'stars' of Orion's Sword, and quite visible in ordinary binoculars, the Orion Nebula M42 is a favourite of most astronomers.

Favourite or not, it can be a challenge to do justice to in a photograph. The colour doesn't show when viewed by eye through a telescope—the nebula shows as a grey form, with a distinct 'hole' in the middle of the nebula, with four small bright stars in the middle of that hole. (There are actually eight stars there, of which several are now known to be binaries. But with amateur telescopes we see them as four.)

When showing this to new viewers I explain that this shows how the dust of the nebula collapsed in to form the new stars. The nebula therefore is a 'star factory'.

But in a photograph of even just five seconds, the red and greeney blue colours start to show. Longer exposures bring out incredible details in the nebula dust clouds. But unfortunately the central four stars—which we know as "the Trapezium" start to blow out or over-expose. Getting the balance right takes just the right exposure and some re-balancing magic with Photoshop!

Here Jonathan Powles has captured and mixed up a beautiful rendition, with the 'bird on flight' appearance clearly visible. He explains the shot:


This is 30 min RGB at various exposure lengths from 30s to 2 min (so as not to burn out the core), blended with 50 min of Ha both in the red channel and as luminance. All done with the DSLR.  I'm not sure of the value of using an Ha filter with a DSLR, bIt it seems to have brought out some detail.

Email ThisBlogThis!Share to TwitterShare to FacebookShare to Pinterest
Labels: Astrophotos—Nebulae